Confinement effects on the solvation structure of solvated alkaline metal cations in a single-digit 1T-MoS2 nanochannel: A first-principles study 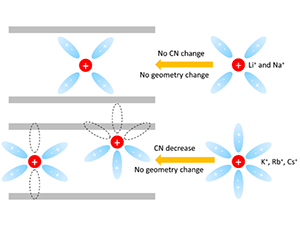 The abstract reads as follows: Confinement plays an important role in determining ion transport in porous materials, which, in turn, may influence the performance of many energy storage and desalination devices. In this work, we combined density functional theory (DFT) with an implicit solvation model and ab initio molecular dynamics (AIMD) to investigate the effects of nanoconfinement on several solvated alkaline metal cations in a single-digit 1T-MoS2 nanochannel. Our DFT calculations with a solvation model indicated that cations with stronger hydration energy introduce a higher number of co-intercalated water molecules into the channel, consistent with early experimental observation obtained for MXene (2D transition metal carbide) channels. The predicted optimal water numbers for the cations were then used for AIMD simulations that explicitly include the effects of the solvent. When compared with the cations in bulk solution, our simulations showed that the hydration structure and coordination number (CN) of the solvated cations confined in the MoS2 channel can be significantly altered. We found that larger cations with weaker hydration energy (K+, Rb+, and Cs+) exhibited a distinctive CN decrease under confinement, while smaller cations (Li+ and Na+) retained a similar hydration shell as in the bulk solution. More specifically, the hydration shell of large cations (K+, Rb+, and Cs+) in MoS2 showed similar features of the coordination angle to the bulk, which suggests the partially broken hydration shell with no geometry change under confinement. Our simulations provided insights into the change of the hydration structure of alkaline metal cations under confinement, which may have important implications on their transport in the 1T-MoS2 channel.

Research primarily supported as part of the Center for Enhanced Nanofluidic Transport, an Energy Frontier Research Center funded by the U.S. Department of Energy (DOE), Office of Science, Basic Energy Sciences (BES), under Award No. DE-SC0019112.