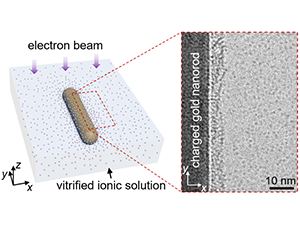 The abstract reads as follows: The individual and collective behavior of ions near electrically charged interfaces is foundational to a variety of electrochemical phenomena encountered in biology, energy, and the environment. While many theories have been developed to predict the interfacial arrangements of counterions, direct experimental observations and validations have remained elusive. Utilizing cryo-electron microscopy, here we directly visualize individual counterions and reveal their discrete interfacial layering. Comparison with simulations suggests the strong effects of finite ionic size and electrostatic interactions. We also uncover correlated ionic structures under extreme confinement, with the channel widths approaching the ionic diameter (∼1 nm). Our work reveals the roles of ionic size, valency, and confinement in determining the structures of liquid–solid interfaces and opens up new opportunities to study such systems at the single-ion level.

This work was supported as part of the Center for Enhanced Nanofluidic Transport (CENT), an Energy Frontier Research Center funded by the U.S. Department of Energy, Office of Science, Basic Energy Sciences under Award no. DESC0019112.