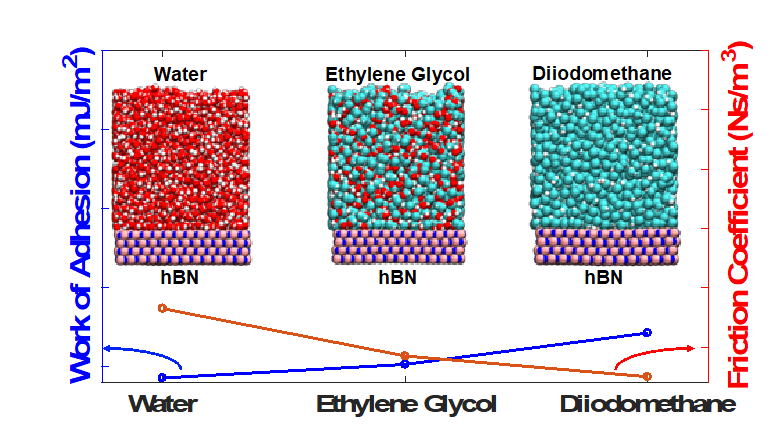 The abstract reads as follows: We investigate the wetting and frictional behavior of polar (water and ethylene glycol) and nonpolar (diiodomethane) liquids on the basal plane of hexagonal boron nitride (hBN) using molecular dynamics simulations. Our results for the wettability of water on the hBN basal plane (contact angle 81°) are in qualitative agreement with the experimentally deduced mild hydrophilicity of the hBN basal plane (contact angle 66°). We find that water exhibits the lowest wettability, as quantified by the highest contact angle, but the highest friction coefficient of (1.9 ± 0.4) × 105 N-s/m3 on the hBN basal plane among the three liquids considered. This intriguing finding is explained in terms of the competition between dispersion and electrostatic interactions operating between the hBN basal plane and the three liquids. We find that electrostatic interactions do not affect the wetting behavior appreciably, as quantified by a less than 3° change in the respective contact angles of the three liquids considered. On the other hand, electrostatic interactions are found to increase the friction coefficients of the three liquids in contact with hBN to different extents, indicating that despite the increased friction of water on hBN, relative to that on graphene, nonpolar liquids may exhibit similar friction coefficients on hBN and graphene. Our findings reveal that the increase in the friction coefficient, upon incorporation of solid–liquid electrostatic interactions, is brought about by a greater increase in the solid–liquid mean-squared total lateral force, as compared to a smaller reduction in the decorrelation time of the solid–liquid force.

M.S.S. and D.B. acknowledge support from the Center for Enhanced Nanofluidic Transport (CENT), an Energy Frontier Research Center funded by the U.S. Department of Energy, Office of Science, Basic Energy Sciences under Award #DE-SC0019112 for understanding the slippage and frictional properties of nanofluidic interfaces.