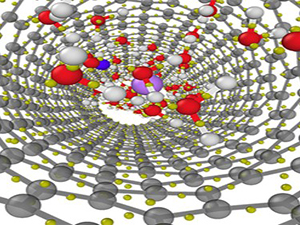 The abstract reads as follows: Perturbations to water, both by ions and confining media, have been the focus of numerous experimental and theoretical studies. Yet, several open questions remain, including the extent to which such perturbations modify the structural and dielectric properties of the liquid. Here, we present a first-principles molecular dynamics study of alkali cations in water (Li+, Na+, and K+) as well as of water and LiCl and KCl solutions under confinement within carbon nanotubes (CNTs) of small diameter (1.1–1.5 nm). Our simulations support the view that the water structure is only modified locally in the presence of cations. We found that molecular polarizabilities are fingerprints of hydrogen bonding modifications, which occur at most up to the second solvation shell for all cations in bulk water. Under confinement, we found that the overall value of the molecular polarizability of water molecules near the surface is determined by the balance of two effects, which are quantitatively different in CNTs of different radii: the presence of broken hydrogen bonds at the surface leads to a decrease in the polarizabilities of water molecules, while the interaction with the CNT enhances polarizabilities. Interestingly, the reduction in dipole moments of interfacial water molecules under confinement is instead driven only by changes in the water structure and not by interfacial interactions. As expected, confinement effects on water molecular polarizabilities and dipole moments are more pronounced in the case of the 1.1 nm CNT.

T.A.P. was supported as part of the Center for Enhanced Nanofluidic Transport, an Energy Frontier Research Center funded by the U.S. Department of Energy, Office of Science, Basic Energy Sciences under Award No. DE-SC0019112.