Similarities and differences between potassium and ammonium ions in liquid water: a first-principles study 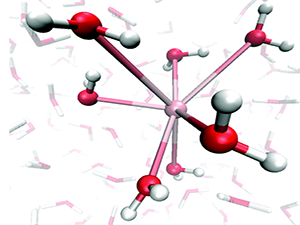 The abstract reads as follows: Understanding ion solvation in liquid water is critical in optimizing materials for a wide variety of emerging technologies, including water desalination and purification. In this work, we report a systematic investigation and comparison of solvated K+ and NH4+ using first-principles molecular dynamics simulations. Our simulations reveal a strong analogy in the solvation properties of the two ions, including the size of the solvation shell as well as the solvation strength. On the other hand, we find that the local water structure in the ion solvation is significantly different; specifically, NH4+ yields a smaller number of water molecules and a more ordered water structure in the first solvation shell due to the formation of hydrogen bonds between the ion and water molecules. Finally, our simulations indicate that a comparable solvation strength of the two ions is a result of an interplay between the nature of ion–water interaction and number of water molecules that can be accommodated in the ion solvation shell.

All the authors were supported as part of the Center for Enhanced Nanofluidic Transport, an Energy Frontier Research Center funded by the U.S. Department of Energy, Office of Science, Basic Energy Sciences under Award No. DE-SC0019112.