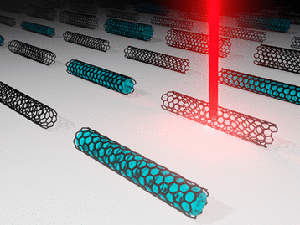 The abstract reads as follows: Although the structure and properties of water under conditions of extreme confinement are fundamentally important for a variety of applications, they remain poorly understood, especially for dimensions less than 2 nm. This problem is confounded by the difficulty in controlling surface roughness and dimensionality in fabricated nanochannels, contributing to a dearth of experimental platforms capable of carrying out the necessary precision measurements. In this work, we utilize an experimental platform based on the interior of lithographically segmented, isolated single-walled carbon nanotubes to study water under extreme nanoscale confinement. This platform generates multiple copies of nanotubes with identical chirality, of diameters from 0.8 to 2.5 nm and lengths spanning 6 to 160 μm, that can be studied individually in real time before and after opening, exposure to water, and subsequent water filling. We demonstrate that, under controlled conditions, the diameter-dependent blue shift of the Raman radial breathing mode (RBM) between 1 and 8 cm–1 measures an increase in the interior mechanical modulus associated with liquid water filling, with no response from exterior water exposure. The observed RBM shift with filling demonstrates a non-monotonic trend with diameter, supporting the assignment of a minimum of 1.81 ± 0.09 cm–1 at 0.93 ± 0.08 nm with a nearly linear increase at larger diameters. We find that a simple hard-sphere model of water in the confined nanotube interior describes key features of the diameter-dependent modulus change of the carbon nanotube and supports previous observations in the literature. Longer segments of 160 μm show partial filling from their ends, consistent with pore clogging. These devices provide an opportunity to study fluid behavior under extreme confinement with high precision and repeatability.

This work was supported as part of the Center for Enhanced Nanofluidic Transport, an Energy Frontier Research Center funded by the U.S. Department of Energy, Office of Science, Basic Energy Sciences under Award # DE-SC0019112.