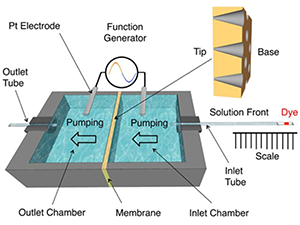 The abstract reads as follows: Synthetic membranes containing asymmetrically shaped pores have been shown to rectify the ionic current flowing through the membrane. Ion-current rectification means that such membranes produce nonlinear current–voltage curves analogous to those observed with solid-state diode rectifiers. In order to observe this ion-current rectification phenomenon, the asymmetrically shaped pores must have pore-wall surface charge. Pore-wall surface charge also allows for electroosmotic flow (EOF) to occur through the membrane. We have shown that, because ion-current is rectified, EOF is likewise rectified in such membranes. This means that flow through the membrane depends on the polarity of the voltage applied across the membrane, one polarity producing a higher, and the opposite producing a lower, flow rate. As is reviewed here, these ion-current and EOF rectification phenomena are being used to develop new sensing technologies. Results obtained from an ion-current-based sensor for hydrophobic cations are reviewed. In addition, ion-current and EOF rectification can be combined to make a new type of device—a chemoresponsive nanofluidic pump. This is a pump that either turns flow on or turns flow off, when a specific chemical species is detected. Results from a prototype Pb2+ chemoresponsive pump are also reviewed here.

Research was supported as part of the Center for Enhanced Nanofluidic Transport (CENT), an Energy Frontier Research Center funded by the U.S. Department of Energy, Office of Science, Basic Energy Sciences under award DESC0019112.